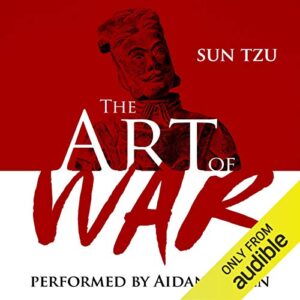 Contents hide
1 The art of war audiobook
2 Applying Sun Tzu’s Art of War to modern business and military strategy
3 The importance of studying The Art of War
4 The enduring relevance of Sun Tzu’s principles
5 How The Art of War can help you achieve success in any area of competition
6 Conclusion
7 Questions & Answers
7.1 Wich art of war book is the best?
7.2 Did Sun Tzu ever lose a battle?
7.3 Why is Sun Tzu so famous?
7.4 What is Sun Tzu’s most famous quote?
7.5 How many books did Sun Tzu write?
7.6 Related posts:

The art of war audiobook

It is considered to be one of the most influential works of military strategy in Chinese history and has affected both Western and East Asian philosophy and military thinking. It has been translated into more than 15 languages.

Sun Tzu’s The Art of War is one of the oldest and most famous texts on military strategy. In it, Sun Tzu outlines a series of principles for effective military campaigning. The work is divided into 13 chapters, each of which covers a different aspect of warfare. The principles outlined in The Art of War are still studied and applied by military commanders and strategists today.

The Art of War has been translated into many languages and is available in audio format. In this audiobook, renowned narrator Simon Vance brings Sun Tzu’s timeless advice to life.

Whether you’re a business executive, a military leader, or simply someone who wants to achieve success in any area of competition, The Art of War will give you the insights and strategies you need to win.

In business, as in war, there is no substitute for victory. The goal of any company is to come out on top of the competition, and the best way to do this is by using the principles of Sun Tzu’s Art of War.

Sun Tzu’s timeless treatise on military strategy has been used for centuries by generals and business leaders alike to gain an edge over their opponents. The book is a veritable playbook for success in any arena, and its lessons are just as relevant today as they were two thousand years ago.

Some of the most important concepts in the Art of War are speed, surprise, and simplicity. Sun Tzu believed that the best way to win was to attack the enemy when they least expected it, and with such force that they were overwhelmed before they had a chance to mount a counterattack.

In business, this can mean moving quickly to seize opportunities before your competitors are aware of them, or developing new products and services that render existing ones obsolete. It is also important to keep your plans and strategies as simple as possible so that they can be executed flawlessly under pressure.

The Art of War is an essential read for anyone who wants to be successful in business or life. By applying Sun Tzu’s principles to your endeavors, you will be well on your way to achieving victory.

The importance of studying The Art of War

The Art of War is an ancient Chinese military treatise dating back to the 5th century BC. The work is attributed to the ancient Chinese general Sun Tzu and it is composed of 13 chapters, each of which discusses a different aspect of warfare. The book has been translated into many languages and is still studied by military commanders and strategists around the world.

The book is not only a treatise on warfare but also a guide on how to conduct oneself in all aspects of life. In particular, The Art of War has been influential in the development of Chinese business strategy. Many business people believe that the principles outlined in the book can be applied to modern-day business competition

There are several reasons why The Art of War is still studied today. First, the book provides a comprehensive overview of warfare and military strategy. Second, the book is easy to read and understand, making it accessible to a wide audience. Finally, the book has stood the test of time and continues to be relevant in the modern-day.

The Art of War is an important book for anyone interested in warfare, military strategy, or business competition. The book provides a clear and concise overview of all aspects of warfare, making it an essential read for anyone looking to gain a better understanding of this complex subject.

Sun Tzu’s The Art of War is widely considered to be one of the most influential and significant works on strategy and military theory in history. The book has been translated into numerous languages and used by military leaders around the world for centuries.

Despite its ancient origins, Sun Tzu’s work is still highly relevant for modern business leaders. In today’s competitive business environment, companies must be constantly thinking about how to gain an advantage over their rivals. Sun Tzu’s insights into human nature, psychology, and political maneuvering can help business leaders develop strategies for success.

Some of the most important lessons from The Art of War for businesses are:

3. Know when to fight and when to retreat.

4. Be flexible and adaptable.

6. Use psychology to your advantage.

7. Win without fighting if possible.

By applying Sun Tzu’s principles to the business world, companies can develop sound strategies for success. By understanding and utilizing Sun Tzu’s insights, businesses can gain a significant competitive advantage.

In business, cutthroat competition is the norm. To succeed, you have to be able to outwit and outmaneuver your opponents. The Art of War by Sun Tzu is an ancient Chinese military treatise that can teach you how to do just that.

The book is divided into 13 chapters, each of which covers a different aspect of warfare. The first chapter, for example, is all about the importance of knowing your enemy. It teaches that to defeat them, you must first understand them.

By understanding your enemy, you can better anticipate their moves and counter them. The Art of War is full of strategic insights that can be applied to any area of competition.

So if you’re looking for an edge in business, pick up a copy of The Art of War and start reading. It just might give you the advantage you need to succeed.

Art of War is a great book for anyone looking to improve their strategic thinking and planning skills. The book provides readers with a wealth of information and examples on how to effectively conduct military operations. While the book was written over two thousand years ago, its lessons are still relevant today. Anyone interested in learning more about military strategy and planning would benefit from reading Art of War.

Wich art of war book is the best?

There is no definitive answer to this question as different people have different opinions. Some of the more popular choices include Sun Tzu’s “The Art of War,” Machiavelli’s “The Prince,” and Clausewitz’s “On War.” Ultimately, it is up to the individual to decide which book is the best for them.

Did Sun Tzu ever lose a battle?

There is no record of Sun Tzu ever losing a battle. He is considered to be one of the most successful military strategists in history.

Why is Sun Tzu so famous?

Sun Tzu is famous for his book “The Art of War,” which is still considered to be one of the most influential works on military strategy. His teachings have been used by generals and military leaders for centuries, and his work is still studied today.

What is Sun Tzu’s most famous quote?

One of Sun Tzu’s most famous quotes is “The supreme art of war is to subdue the enemy without fighting.” This quote emphasizes the importance of strategy and tactics in winning a war, and the need to avoid direct conflict if possible.

How many books did Sun Tzu write?

Sun Tzu wrote several books on military strategy, but “The Art of War” is by far his most famous and influential work.