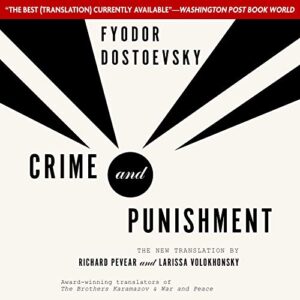 How Dostoevsky’s Crime and Punishment changed the literary landscape forever

When Fyodor Dostoevsky wrote Crime and Punishment in 1866, he had no way of knowing that it would become one of the most popular and influential novels of all time. Over 150 years later, readers are still fascinated by the story of Raskolnikov, a man who commits murder out of desperation and then must grapple with the consequences of his actions.

There are many reasons why Crime and Punishment continues to resonate with readers. The psychological depth of the characters, the moral complexity of the story, and the social commentary all contribute to the novel’s timeless appeal. In this blog post, we’ll take a closer look at each of these aspects of Dostoevsky’s masterpiece.

How Crime and Punishment changed the literary landscape forever

When Crime and Punishment was first published, it was met with mixed reviews. Some critics praised the novel for its psychological insight, while others found the characters unsympathetic and the plot contrived. But despite the initial negative reaction, the novel quickly gained popularity, and today it is considered one of the most important works of world literature.

Crime and Punishment changed the literary landscape forever by introducing a new type of protagonist. Prior to Dostoevsky’s novel, most literary protagonists were either completely good or completely evil. But Raskolnikov is a more nuanced character, someone who is capable of both great kindness and great violence. This dichotomy makes him a more relatable and realistic character, and it is one of the reasons why readers have continued to identify with him for over 150 years.

Another reason why Crime and Punishment continues to be relevant is because of the social commentary it offers. The novel addresses a number of pressing issues that are still relevant today, such as poverty, crime, and the death penalty. Dostoevsky’s exploration of these topics makes Crime and Punishment more than just a work of fiction; it is also a powerful reflection on the human condition.

The psychological depth of the characters

One of the most impressive aspects of Crime and Punishment is the psychological depth of the characters. Dostoevsky was a master psychologist, and he uses his knowledge to create fully-realized characters who feel like real people. We are able to understand their motivations and empathize with their struggles.

This is best illustrated in the character of Raskolnikov. He is a complex and contradictory figure, and we see this clearly in his conflicting emotions after committing the murder. On the one hand, he feels relief that he has finally taken action against the unjust world that has oppressed him for so long. On the other hand, he is plagued by guilt and remorse for the innocent lives that he has taken.

It is this psychological depth that allows us to understand Raskolnikov’s actions, even if we do not agree with them. We see that he is a product of his environment, and that his actions are motivated by a desire to escape the poverty and oppression that he has experienced in his life.

The moral complexity of the story

Another reason why Crime and Punishment continues to be popular is because of the moral complexity of the story. The novel does not offer a simple, black-and-white view of morality. Instead, it allows readers to explore the grey area between good and evil.

This is best illustrated in Dostoev sky’s treatment of the murder itself. He does not condone Raskolnikov’s actions, but he also does not condemn them outright. Instead, he allows readers to decide for themselves whether or not the murder was justified. This ambiguity makes the novel more thought-provoking and engaging, and it is one of the reasons why Crime and Punishment continues to be read and discussed by people all over the world.

The social commentary in the novel

As well as being a psychological and moral thriller, Crime and Punishment also offers a social commentary on the problems of 19th-century Russia. Dostoevsky was a keen observer of his society, and he uses the novel to highlight the problems of poverty, crime, and the death penalty.

The issue of poverty is particularly relevant in today’s world. Raskolnikov’s poverty is a major factor in his decision to commit murder, and it is also one of the reasons why he is unable to escape the consequences of his actions. The novel shows us that poverty can lead people to desperate measures, and it highlights the need for social reform.

The problem of crime is also addressed in the novel. Raskolnikov’s crime is motivated by his desire to overthrow the unjust social order, but it ultimately leads him to a life of suffering and isolation. The novel thus shows us that crime does not pay, and that it ultimately destroys those who commit it.

Finally, the issue of the death penalty is also explored in the novel. Raskolnikov is faced with the choice of execution or exile, and he chooses the latter. The novel shows us that even criminals have a right to life, and that the death penalty is not always the best solution.

Why readers are still fascinated by Crime and Punishment today

Crime and Punishment continues to be popular with readers today because it is a complex and thought-provoking novel that offers a psychological and moral exploration of the human condition. The characters are richly drawn and the story is compelling. In addition, the novel also provides a social commentary on the problems of 19th-century Russia. It is these factors that make Crime and Punishment an enduring classic of world literature.

What is the main idea of Crime and Punishment?

The main idea of Crime and Punishment is that people who commit crimes deserve to be punished. The novel follows the story of Rodion Raskolnikov, a man who murders an old woman for her money. Raskolnikov is wracked with guilt and eventually turns himself into the police. He is put on trial and sentenced to prison. In the end, Raskolnikov realizes that his actions were wrong and that he must suffer the consequences of his crime.

Why are Crime and Punishment so popular?

Crime and Punishment are popular because it is a well-written, suspenseful novel that explores the psychological motivations of a criminal. It also provides a social commentary on the state of Russia in the 19th century. Many readers can relate to Raskolnikov’s struggle to come to terms with his crime, and his eventual redemption provides hope for the reader.

Was Dostoyevsky a nihilist?

No, Dostoyevsky was not a nihilist. In Crime and Punishment, he critiques the philosophy of nihilism, which was popular at the time. Dostoyevsky believed that people are capable of great goodness as well as a great evil, and that life has meaning. This is in contrast to the nihilist belief that life is meaningless and that people are nothing more than animals.

Did Dostoevsky agree with Nietzsche?

No, Dostoyevsky did not agree with Nietzsche. Nietzsche was a German philosopher who believed that people should live according to their own individual will, regardless of societal norms. Dostoevsky, on the other hand, believed that people should be guided by morality and ethics. He thought that if people acted purely out of self-interest, it would lead to chaos and destruction.

What is the opposite of nihilism?

The opposite of nihilism is the belief in objective morality. This means that there is a right and wrong, regardless of what an individual believes. This belief system is based on the idea that human beings are capable of reason and should use it to make ethical decisions.

Should I read Crime and Punishment or Brothers Karamazov?

It depends on what you are looking for in a book. If you want a psychological thriller, then Crime and Punishment is a good choice. If you are interested in a philosophical novel that explores religious and ethical issues, then Brothers Karamazov would be a better option.